Bull Ant on a Wire

Termites are often called “white ants” because they are mostly pale brown to white. However, termites are very different to ants. As the two photos shown above, ant has elbowed antennae while termite has beadlike antennae. Ant has constriction between thorax and abdomen. It is easy to see that ant has three body parts while Termite has only two body parts as there is no constriction between thorax and abdomen.

Termites exist in a colony in several castes – The queen, the king, workers, soldiers and reproductive.

Worker termites constitue the greatest number (normally 70% or more) of individuals in a colony. They do most of the jobs including gathering food, maintaining and repairing, tending the young and feeding all the other castes.

Soldier termites are usually darker in colour and have larger and darker heads than the workers. The main function of soldier termites is to defend the colony against invaders.

Some people are confused with winged ants and winged termite (termite alate). The photos below show the differences between the two. 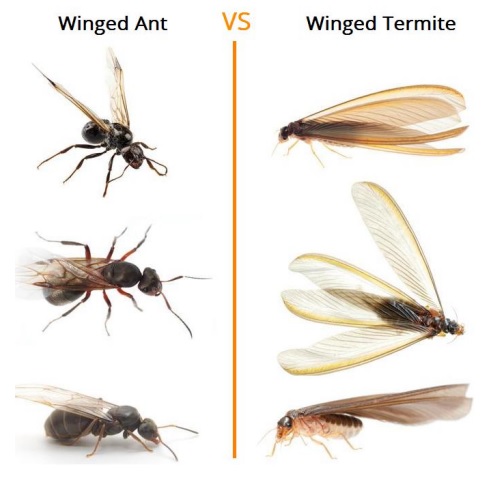